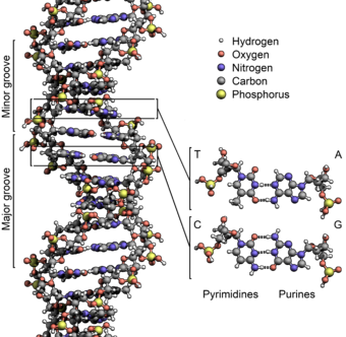 The double helix shape of a DNA molecule is often compared to a spiral staircase or a twisted ladder.  The backbones, or sides of the ladder are made of the phosphate and deoxyribose molecules of the nucleotides.  The backbones are connected in the center by the nitrogenous bases.

Nitrogenous Bases
There are four nitrogenous bases that may be a part of a DNA nucleotide.  They are Adenine(A), Thymine(T), Guanine(G), and Cytosine(C).  Thymine and Cytosine are Pyrimidines.  The have a single ring structure.  Adenine and Guanine are Purines.  They have a double ring structure.  The four bases each join to a specific complementary base according to base pairing rules.  Adenine always joins with Thymine, and Guanine always joins with Cytosine.  (A-T, G-C)  The bases are joined by Hydrogen bonds. 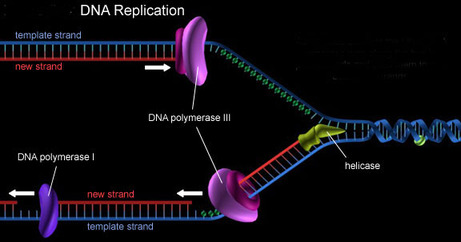 Before cell division, the DNA is copied.  This process is called DNA replication.
Replication occurs in 3 steps:
The process is semi-conservative.  Each new double stranded molecule is composed of one old strand and one new one.

The purpose of DNA is to control the activities of cells by making proteins.  DNA is in the nucleus.  Proteins are made at the ribosomes.  Since DNA can't leave the nucleus, it requires an intermediate molecule called RNA.


RNA stands for ribonucleic acid.  There are four main structural differences between DNA and RNA.

There are three types of RNA.

Mutations are changes in the nucleotide-base sequence of a gene or DNA molecule.  Knowing a few basic types of mutations can help you to understand why some mutations have major effects and some have no effect at all.

A substitution mutation that exchanges one base for another (i.e. switching an A to a G, CTGGAG to CTGGGG).
Such a substitution could:

Insertions are mutations in which extra base pairs are inserted into a new place in the DNA (ex. CTGGAG to CTGGTGGAG).

Deletions are mutations in which a section of DNA is lost, or deleted (ex. CTGGAG to CTAG).

Since protein-coding DNA is divided into codons three bases long, insertions and deletions can alter a gene so that its message is no longer correctly parsed.  These changes are called frameshifts.  For example, consider the sentence, "The fat cat sat."  Each word represents a codon.  If we delete the first letter and parse the sentence the same way, it doesn't make sense.  (hef atc ats at)  In frameshifts, a similar error occurs at the DNA level, causing the codons to be parsed incorrectly.  This usually generates proteins that are useless.